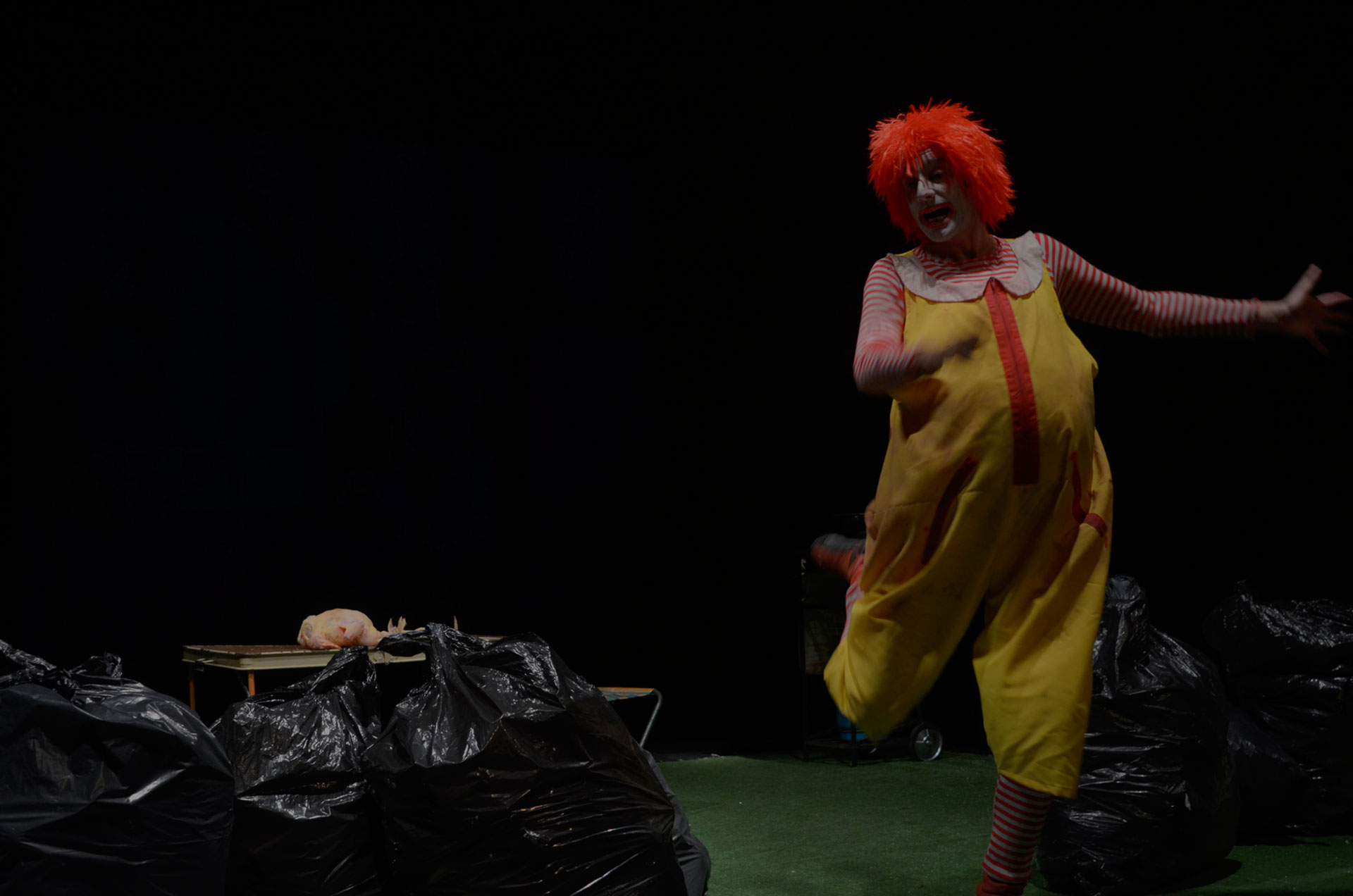 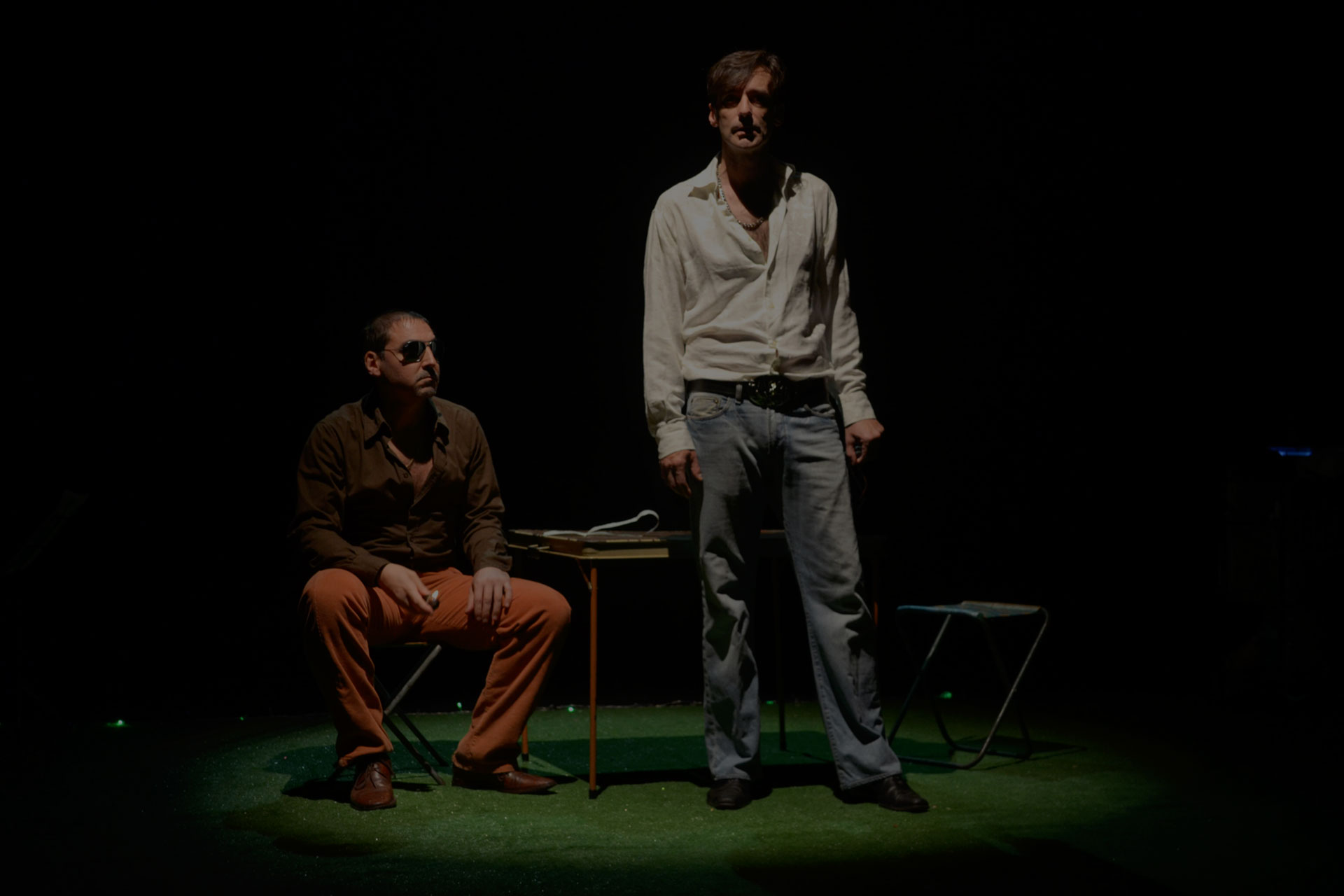 (Agamemnon. I came back from the supermarket and beat up my son)
In ‘Agamemnon. I came back from the supermarket and beat up my son’, the dramatic action line is set by two long contrapuntal monologues about the futility of modern man in consumer society. A mirror game that in fact returns us our true image, the most pathetic and appalling one: the belief that we consume what we want when we are actually consumed by what we think we want and need. The piece’s storyline sets off from the brutal frustration of a middle class parent that returns from getting the family groceries and realizes that everything he bought was not really what he wanted to buy, even worse, not even what he needed for subsistence. His dismay, aware of such a money waste and seeing himself surrounded by trivial consumer products idealized by Capitalism communication device (promotional magic turns a brand of detergent into the key to happiness, or a body cream is revealed as the secret of eternal youth, for example) leads him to take revenge over his family members. Thus, he unleashes a fierce beating on his wife, and then requires her complicity to join him to give their son a beating too. Guilt falls immediately upon him and he decides to go for a family walk to mend things. But the situation gets frustrated once again when, determined to have a good time at McDonald’s, chaos ensues again due to minimal trifle, in fact nothing but the excuses covering for the void in any average normal middle class individual. Once again, Rodrigo Garcia takes back his favorite topics, society criticism through a cynical stance. But cynicism understood as philosophical thought and not as a postmodern act. In Rodrigo Garcia’s terms, the cynic bears the task of snatching off the masks and expose the wiles covered by society to prevent petty bourgeois conformism to impose over the power of the singular, only possible remedy against the mass media tyranny. Rodrigo García’s text practices a pedagogy of despair, undermining confidence in ideologies through sarcasm, proposing thus to avoid being subject to secular ideals such as work, family or nation, understood as practices of reclusion of the subject. The staging does not propose a naturalistic space but rather a collection of slogans, projections and sounds that progressively build the sense of the scene, where two men wearing expensive but dubiously tasteful clothes narrate the story while they relive some of the told facts. Prototypical elements of consumer society appear (lots of ketchup as a representation of fast food, chicken fried onstage as evidence of delivery food-based diet, countless garbage bags filled with waste (waste still bearing brand logos), turning the stage into a overfilled device full of both concrete and metaphoric components. What takes place in the scene is not necessarily consistent with what it is reported, making the resulting performance a complex system of meanings and signifiers to be decoded. 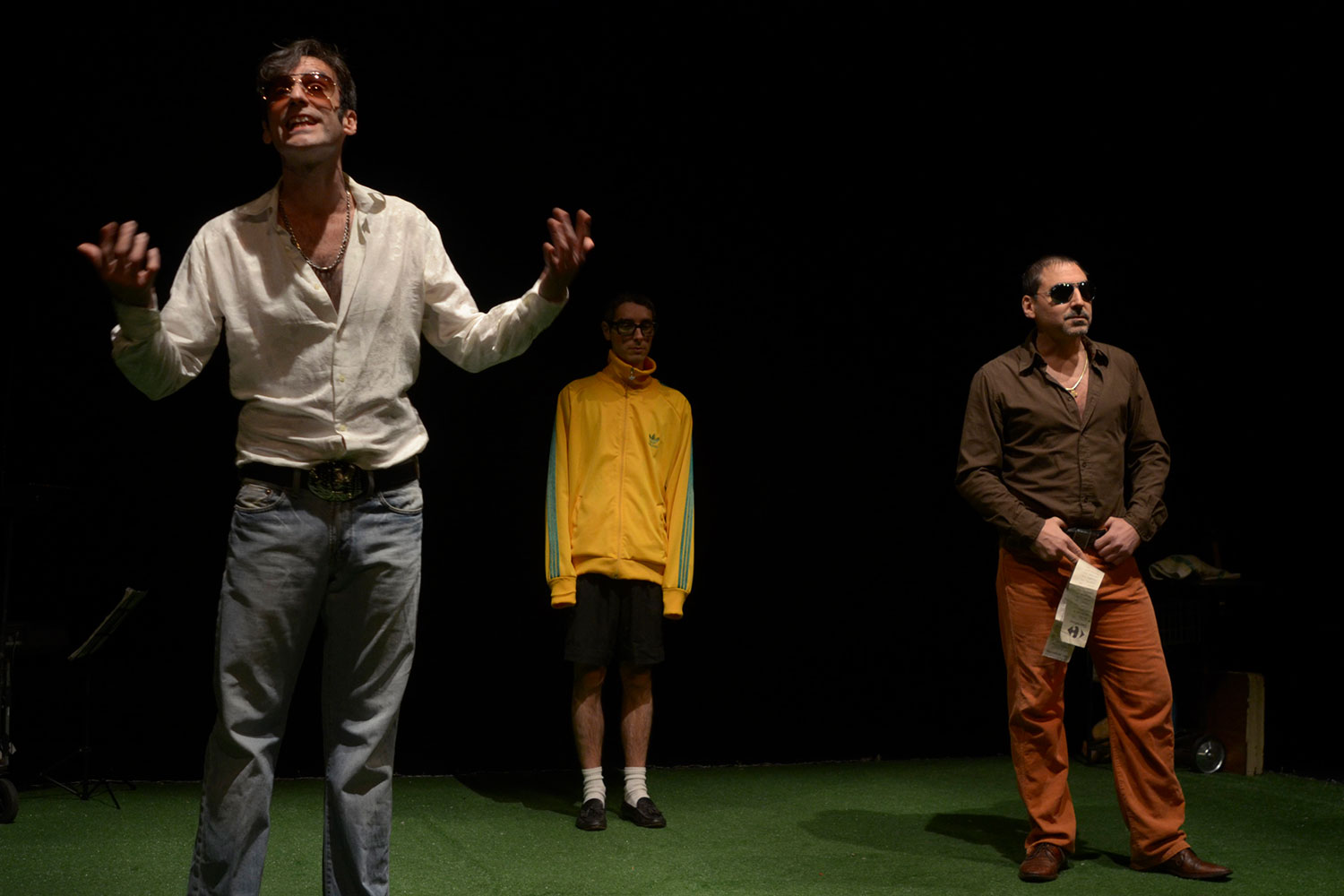 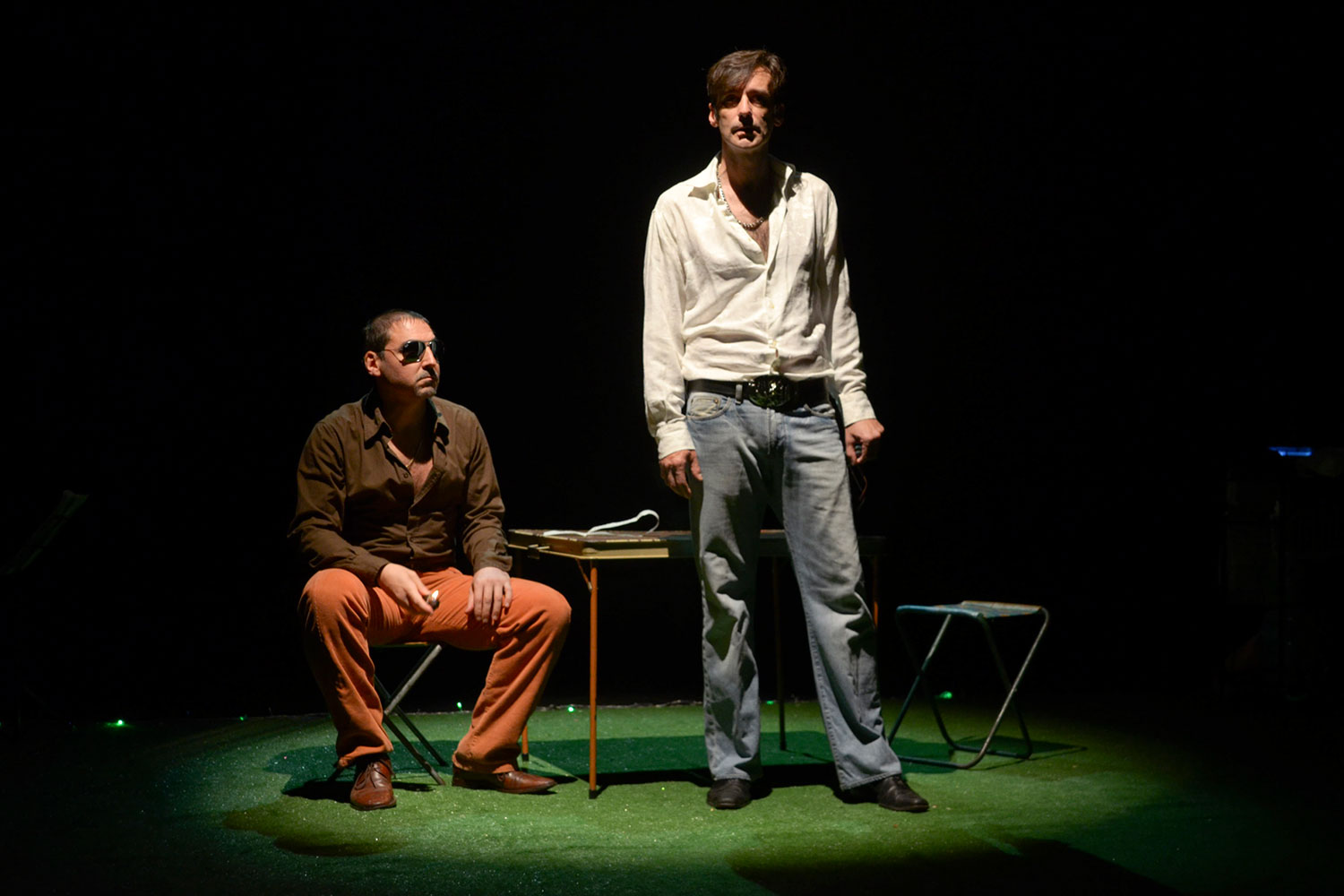 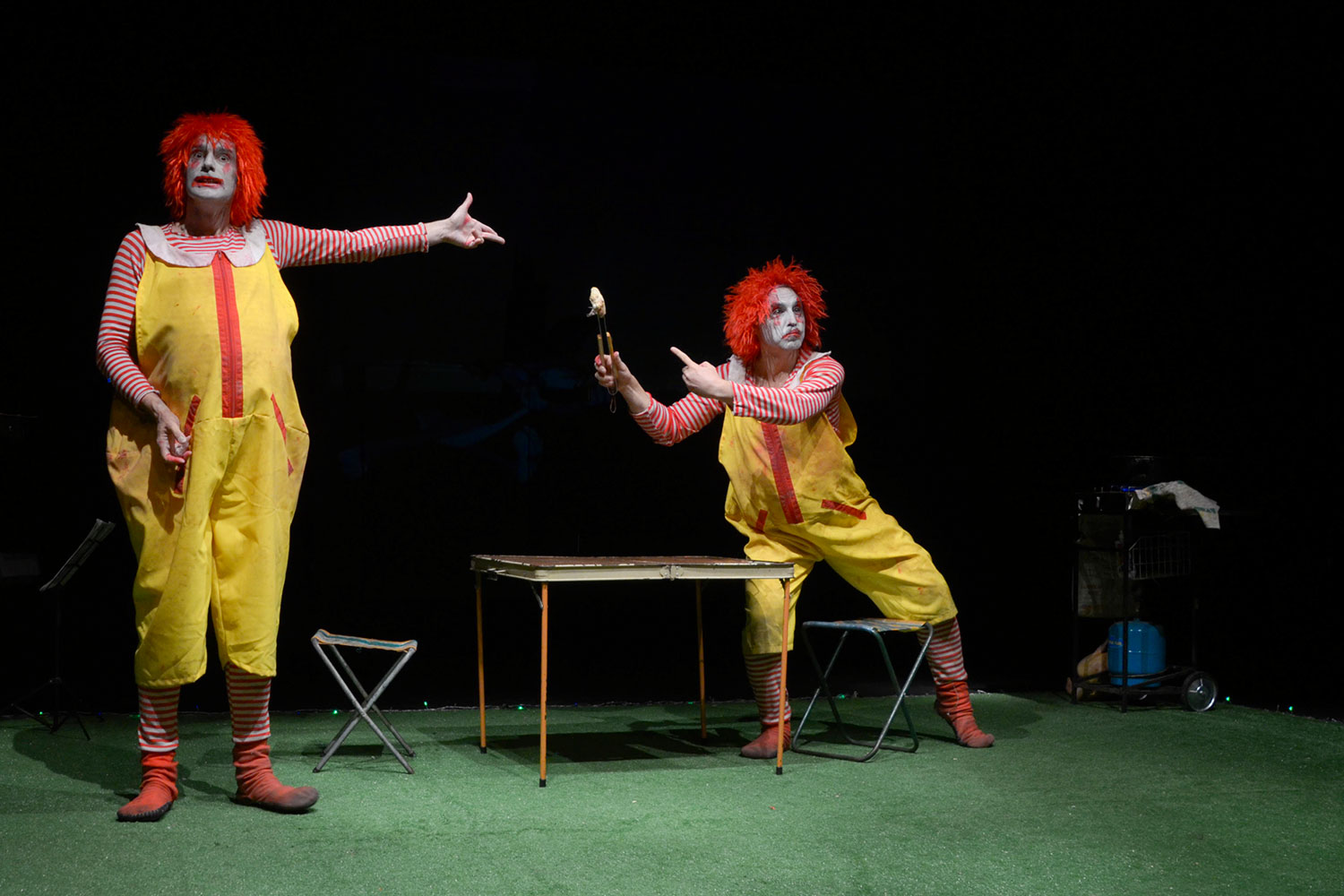 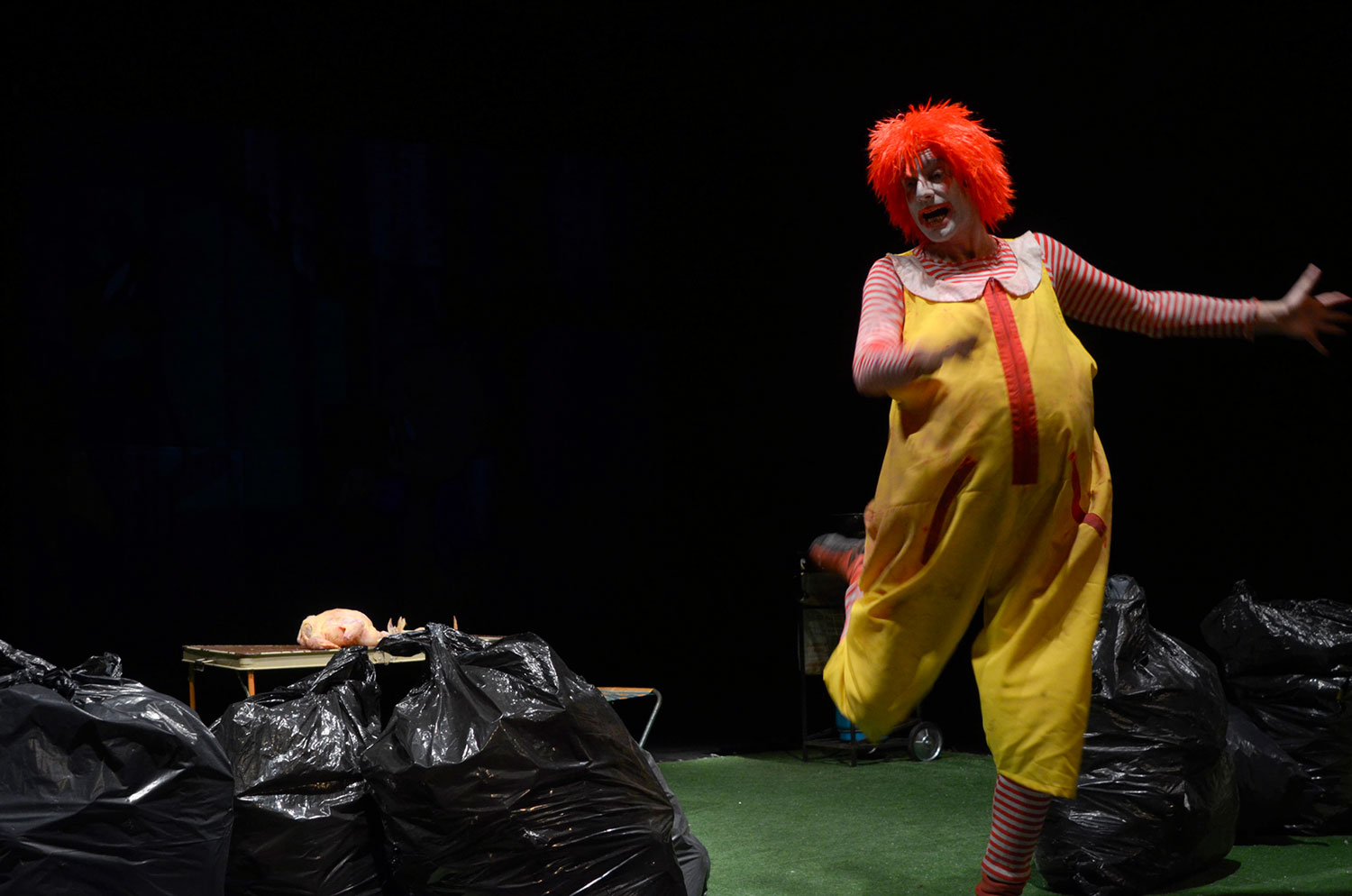 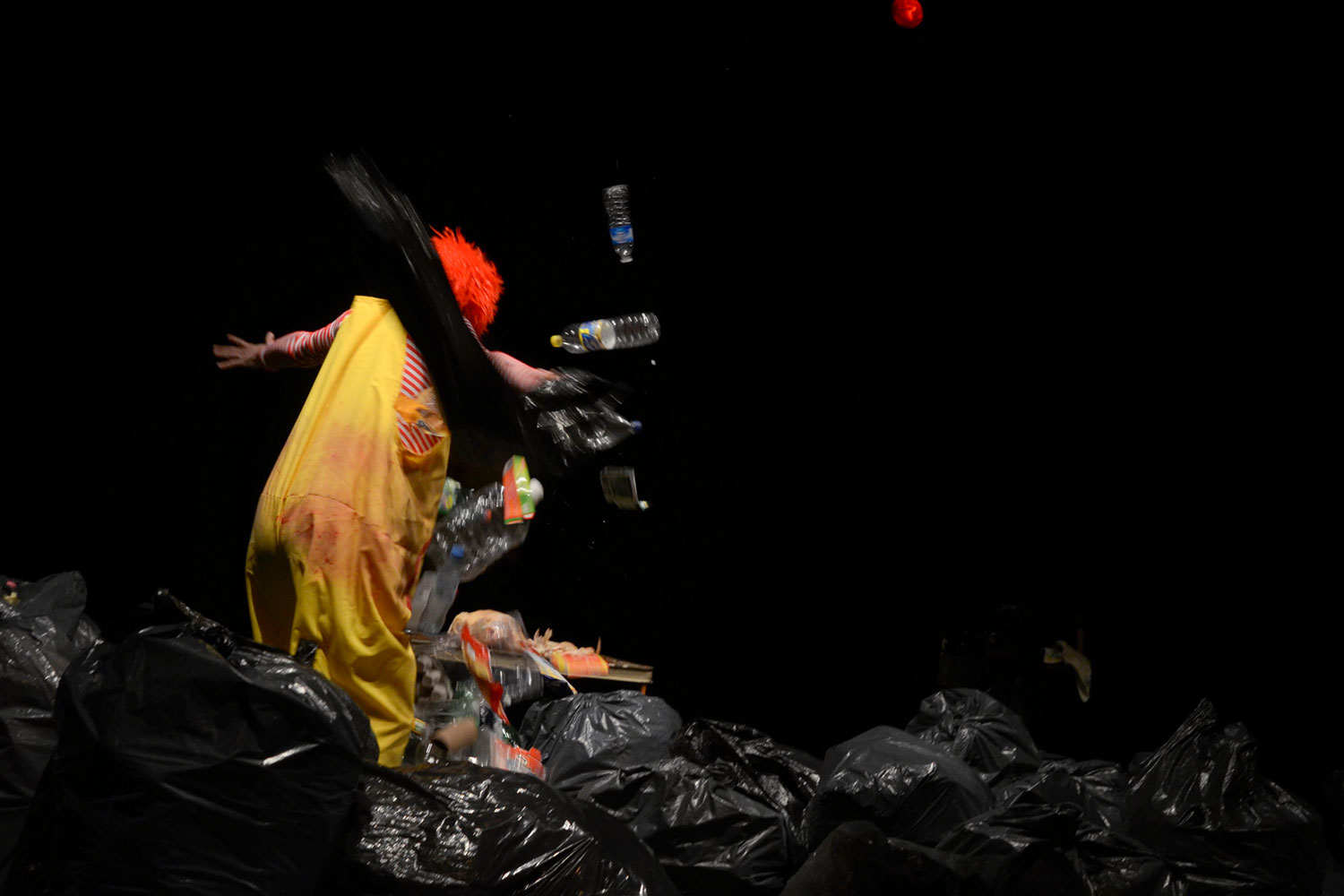 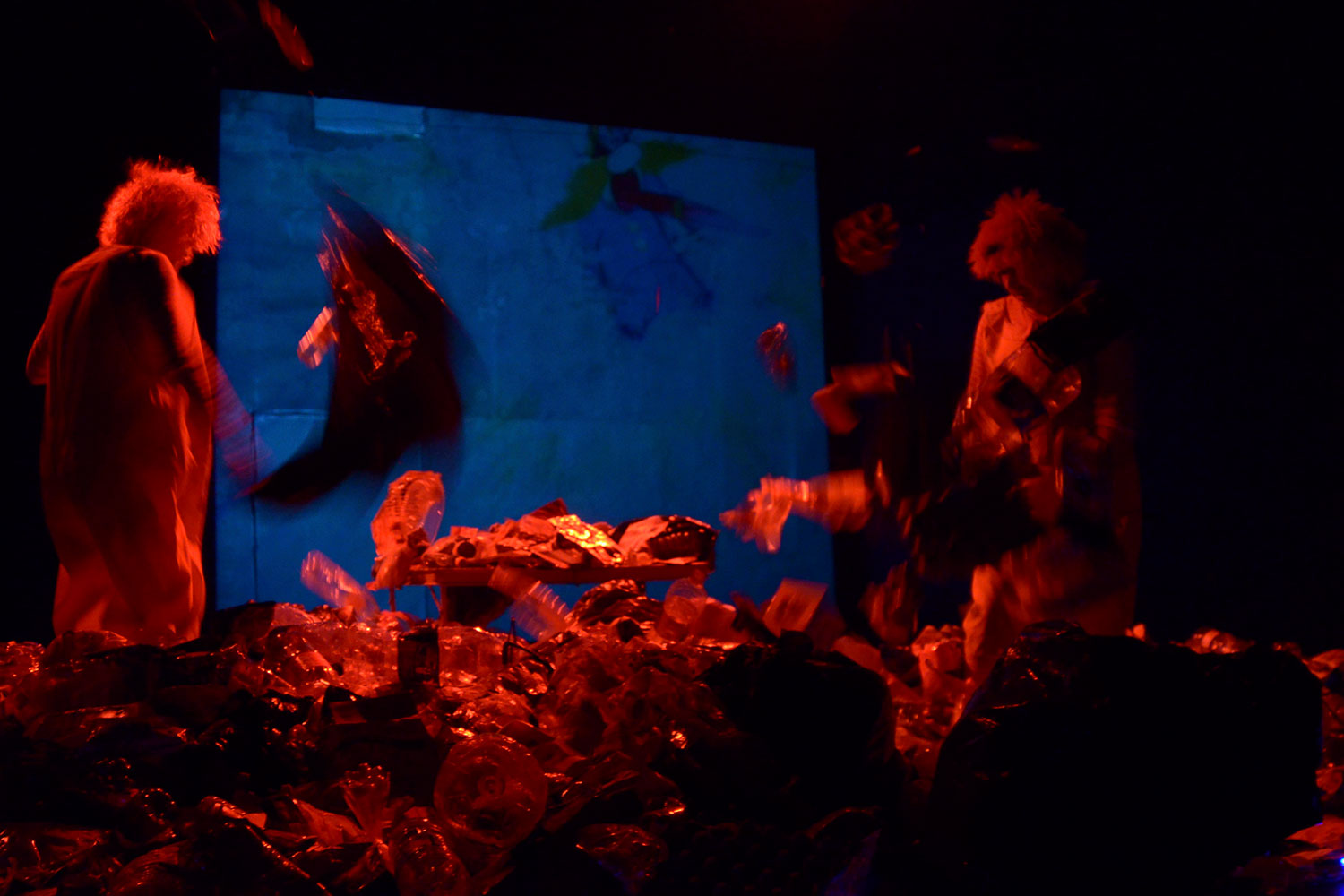 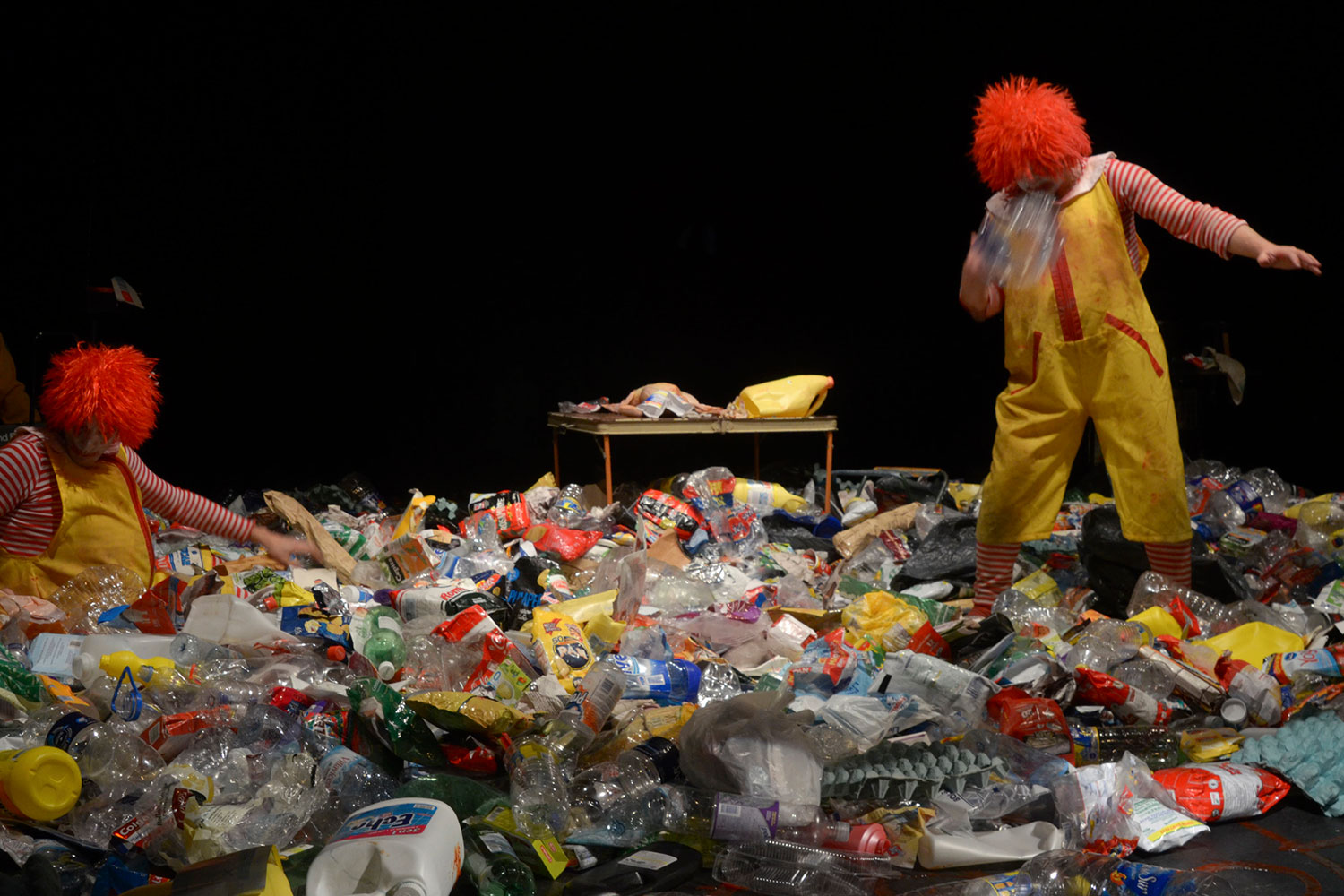 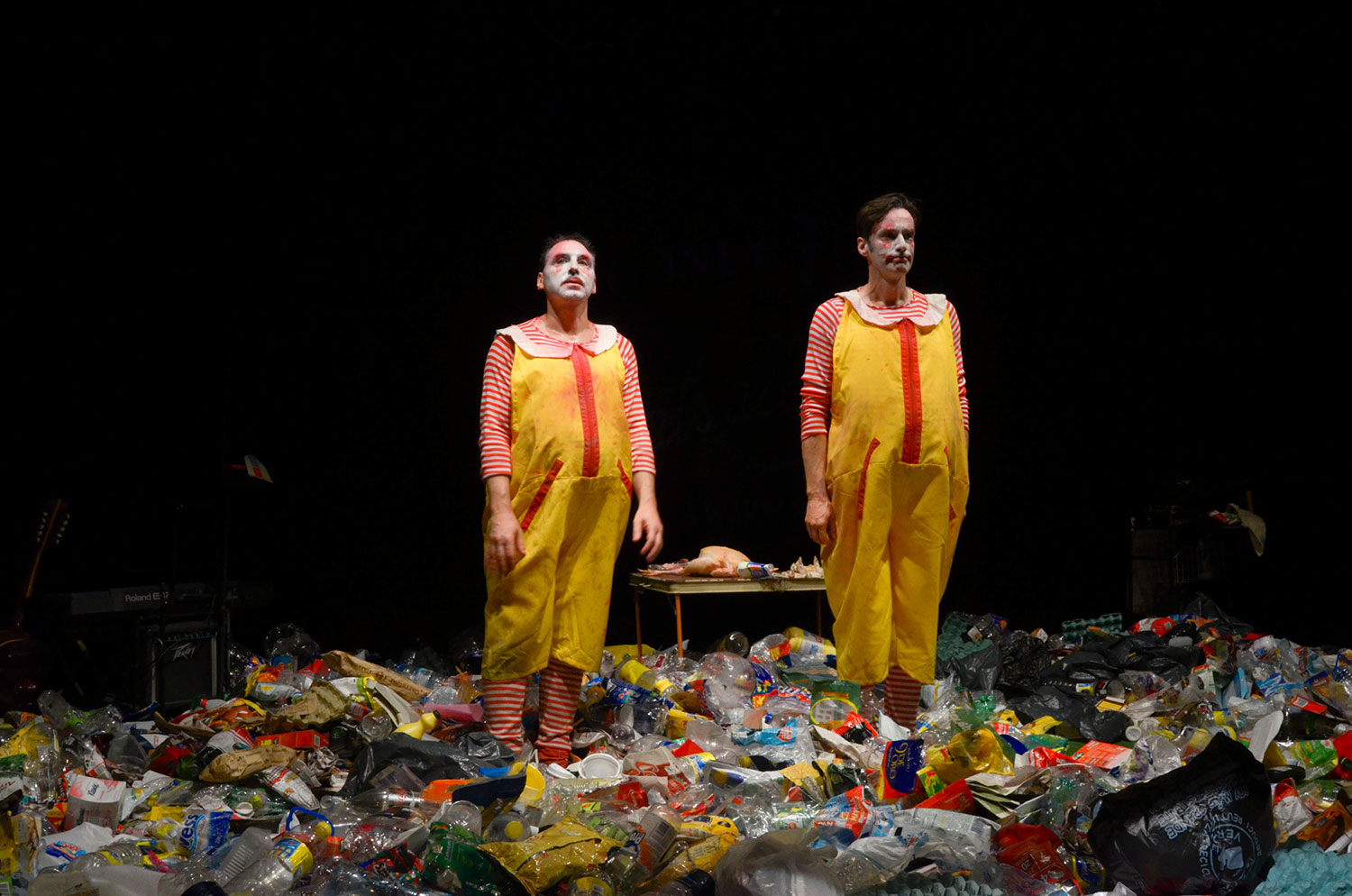 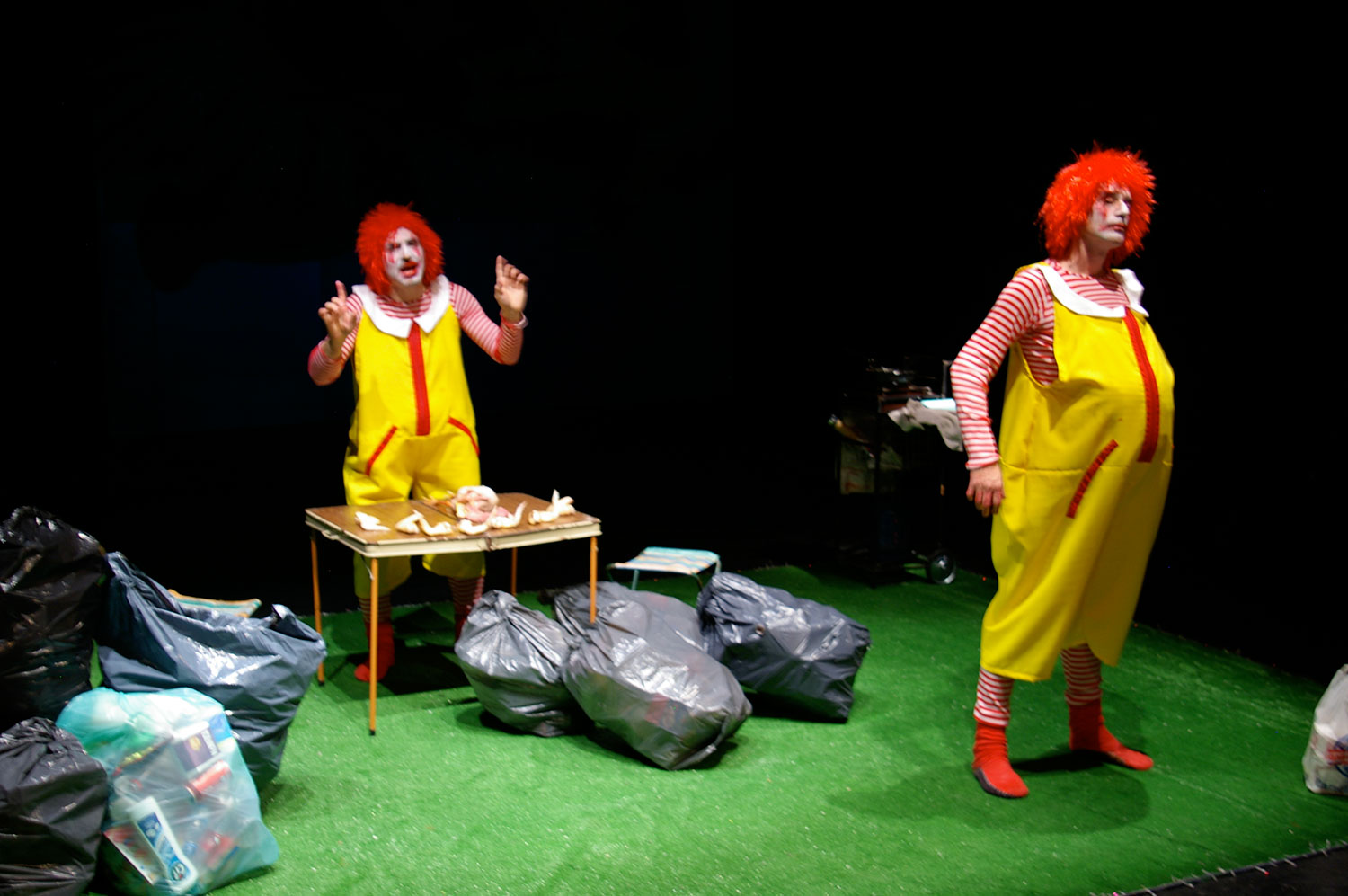 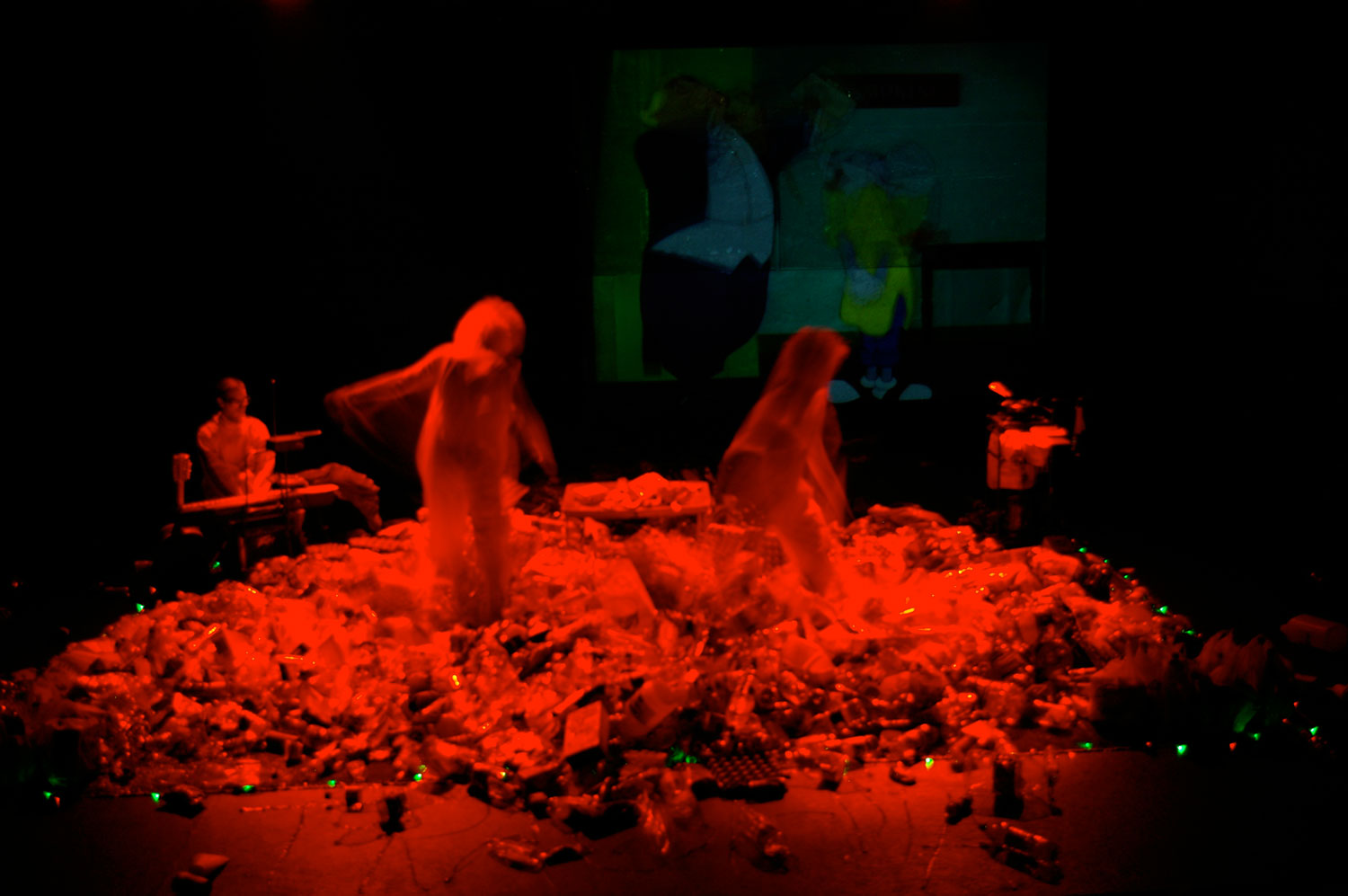 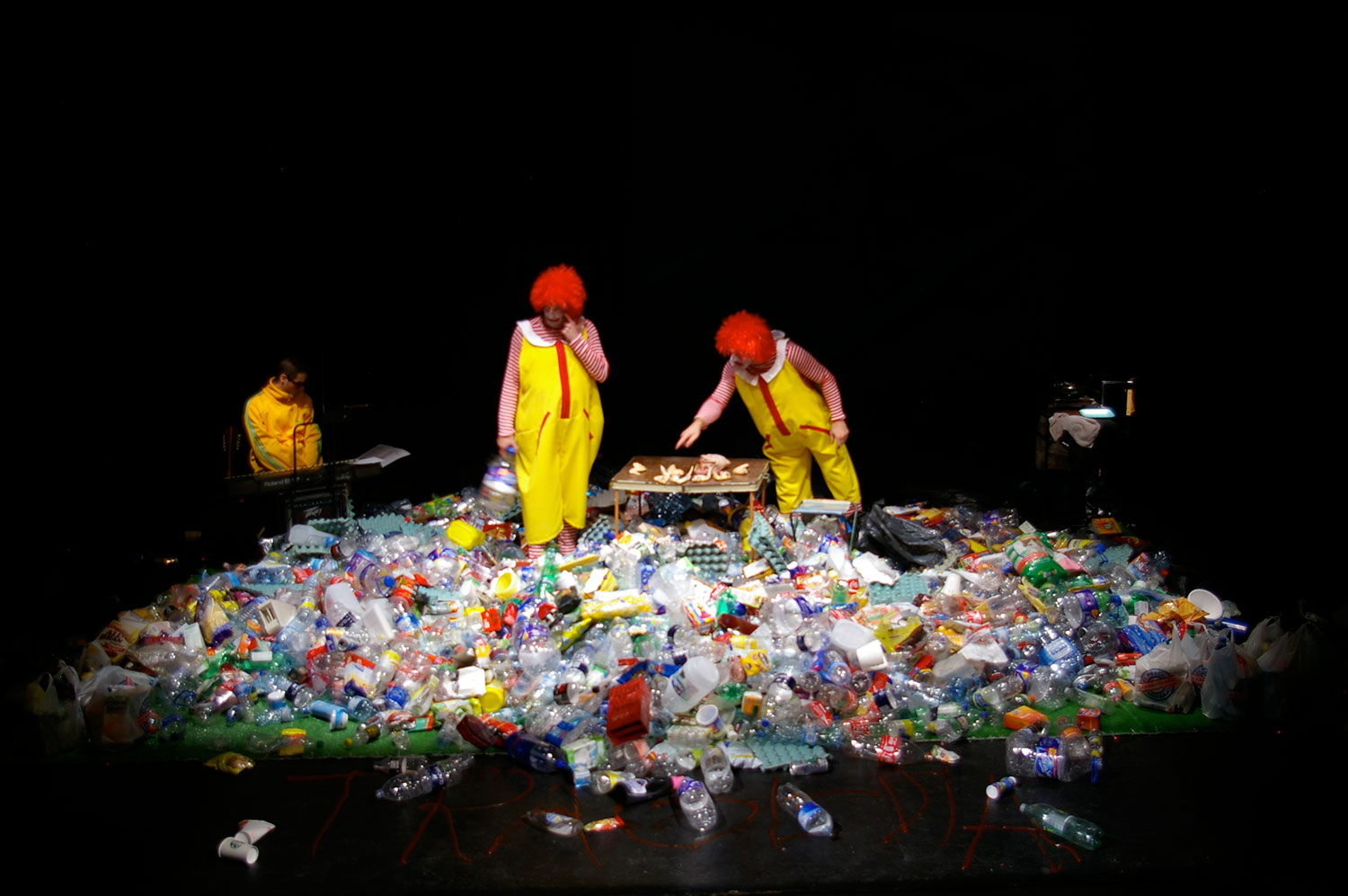 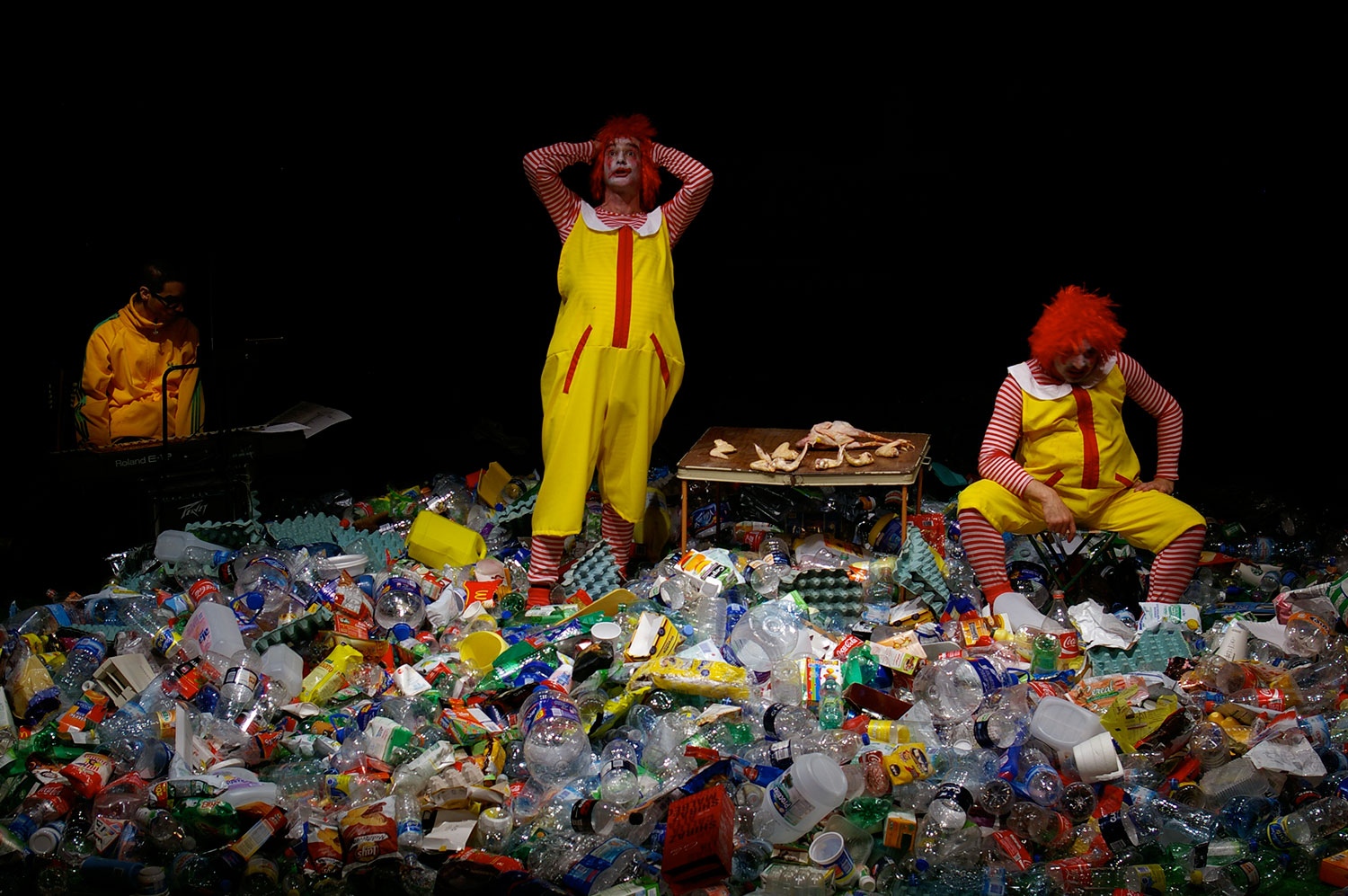 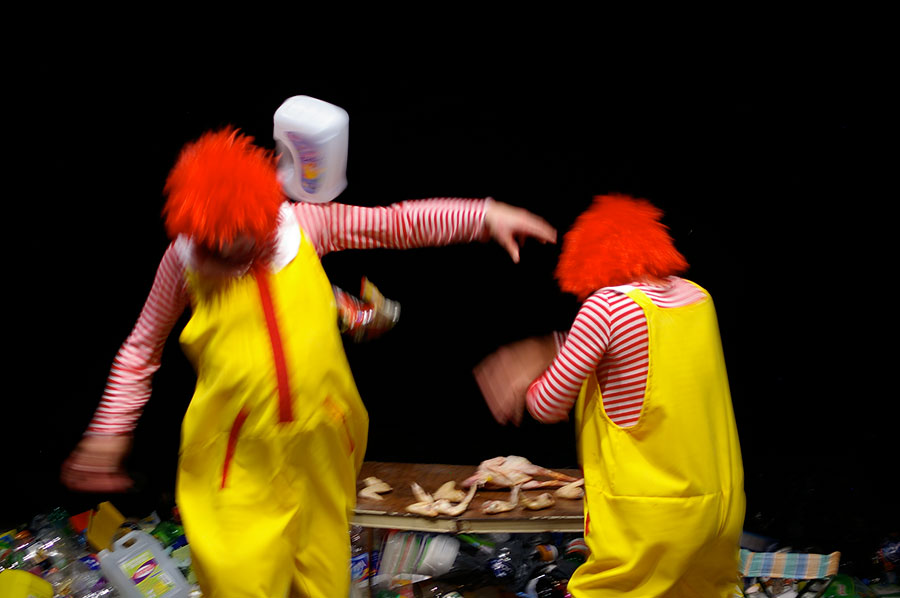 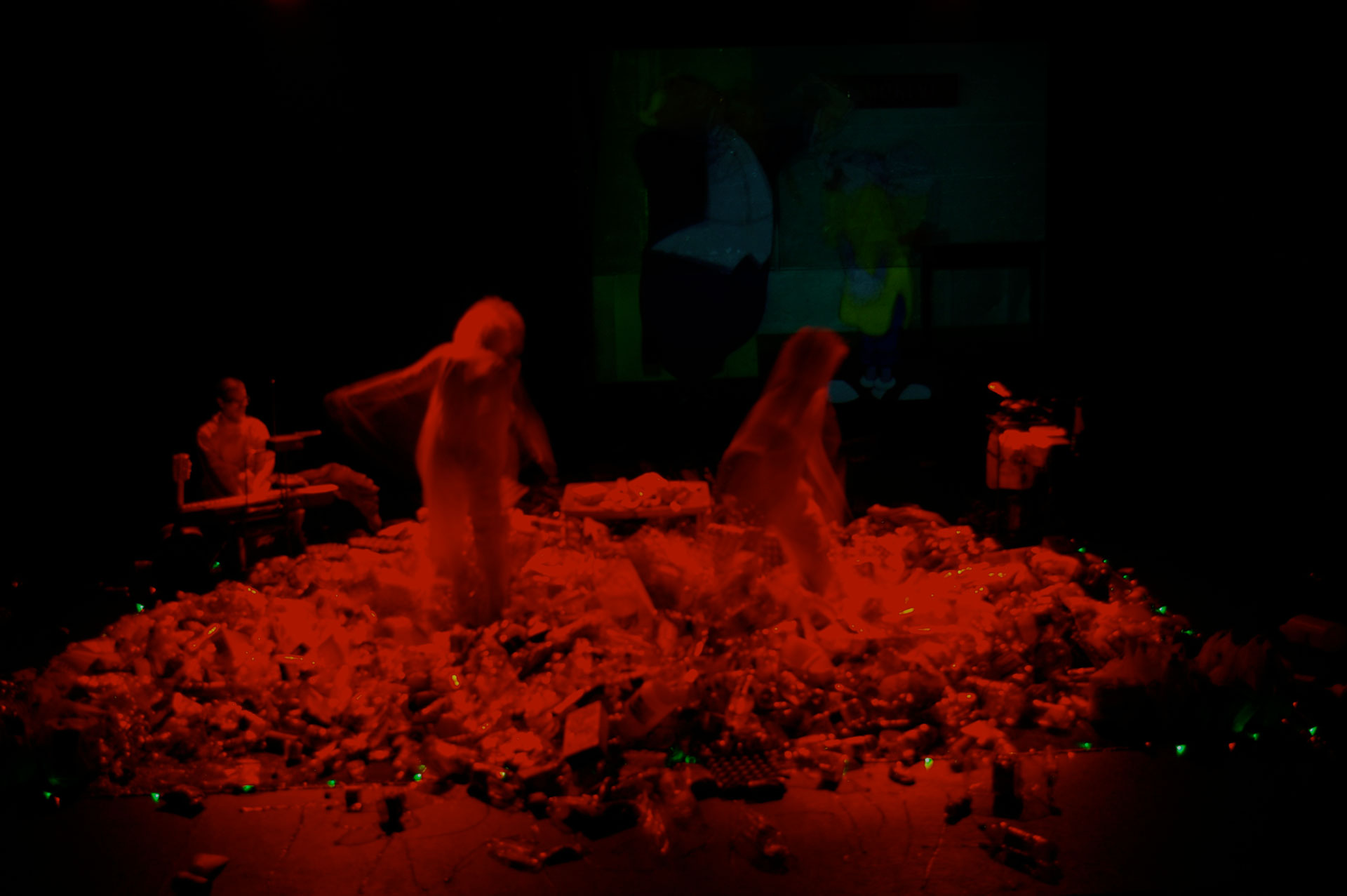